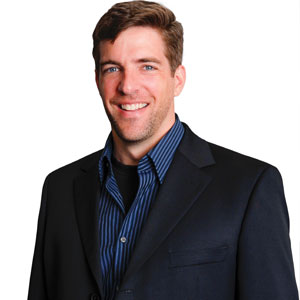 Mike Psenka, President and CEO The goal of teamwork is generally to get work done in a faster and more effective manner. Goal aside, what often happens however, is that teamwork diminishes the chances of overall success in a project. How? By falling short on individual tasks. If even one person doesn’t complete a specific task, it can delay or derail a project. And imagine the snowball effect when you multiply that by several team members. Organizations fail to understand this paradoxical predicament, despite the fact that the answer to this conundrum lies in the fundamentals of probability—the odds of failure increase with the number of participants and tasks within a workflow. Mike Psenka, President and CEO of Moovila—a company that specializes in collaboration and project management technology—refers to this as the “Project Paradox.”

He supports this theory with the example of a collaborative environment, where each member is designated specific tasks. He breaks down the probability of such projects’ success into two distinctive components—the mathematical paradox and the sociological mindset of the workforce. To illustrate the effect of these aspects, consider a team composed of 8 people working on 20 different operations. Even if each participant is 90 percent efficient at what he or she does, the project would have a completion rate of not more than 12 percent. On the sociological side, a study pertaining to workplace accountability shows that the success of the collaboration between managers and subordinates has an efficiency of 80 percent while the same success rate reduces to merely 10 percent among peers participating in the project. Such inadequacies in the management of workflows often lead to the addition of extra resources, extension of deadlines, and prolonged working hours for employees.

As a countermeasure, Moovila streamlines collaborative projects by effectively defining what is commonly referred to as the “critical path”—the trajectory for the series of operations that must occur within a workflow to deliver success for organizations. “Research has time and again shown that a significant amount of work is to be done around critical path management, particularly when people collaborate on larger initiatives. That is our key competency. We optimize the critical path for effective collaboration,” explains Psenka

The Differentiators—Connectivity, Accountability, and Predictability

Moovila has developed a platform that analyzes and prioritizes the critical path of collaborative work to streamline multiple dependent processes within a workflow. The platform forecasts the risks associated with projects and resolves impediments that hinder the completion of tasks. To optimize collaborative endeavors, the company has developed dedicated chat channels related to specific tasks, teams and projects so that communication is contextualized, reducing the need for unnecessary meetings and long email threads.

Moovila lists a set of prerequisites as ‘baseline functionalities’ required to achieve effective collaborations for enterprise projects. “A company needs to identify the nature of work, calendar events correlating to the workflow, and consolidate tasks into respective projects, people, and dependencies,” says Psenka. Through this classification, Moovila’s critical path engine, utilizes SmartTasks™—the company’s atomic unit of work within the platform—to assign work to individuals and teams. A methodology such as this creates a dedicated network for the corresponding series of operations within an organization. It provides a consolidated and organized view of the project through collaboration channels, contextualized to the nature of work.

With Moovila, the needle gets moving when organizations collaborate with distributed teams. It assists project managers in efficiently streamlining the workflow for faster completion

In the Moovila platform, connectivity, accountability, and predictability form the cornerstones of critical path management. The platform enables project managers to create teams and extended groups within the workflow. It encourages organizations to invite subcontractors and vendors outside the company in a secure and compliant manner to contribute to the ongoing project, thereby enhancing the connectivity among peers. Project managers can examine the entire critical path while third-party participants can only view the tasks assigned to them. The platform enforces people to accept or reject the work allotted to them with the help of an agreement within the solution, ensuring the accountability for the tasks designated to each person. “In today’s world of collaboration and virtual economy filled with disparate teams, both internal and external, quite a few people are working in remote offices. Unfortunately, some of them choose to ignore or reject the work assigned to them silently,” explains Psenka. If the assigned tasks are priorities, one needs to be certain if they have been accepted or rejected. By providing visibility into the acceptance or rejection of tasks, Moovila ensures a degree of transparency in the workflow to streamline organizational objectives effectively. Task management of this sort enables greater fluidity within the organization as it illuminates the completion of tasks on the critical path within the stipulated timeframes. Throughout the collaboration process, Moovila’s critical path engine analyzes the project dependencies associated with each operation, identifies the possible risks, and finally, provides forecasts that detail how those risks could impact the completion of the project.

The Moovila platform meets the participants where they live – through email notifications as well as push notifications— both on the mobile and desktop versions— allowing project managers to nudge participants when the corresponding tasks are delayed, or key updates occur on the project status. “The critical path engine updates tasks, modifies risks, identifies the changes in the critical path, and creates new paths based on the dynamic nature of the project. This helps project managers visualize the entire project based on real-time data and understand the priorities within the critical path,” emphasizes Psenka. By presenting the related tasks and dependencies through the Critical Path Engine, the platform allows project managers to spend less time chasing down updates and more time strategically communicating the risks and resolutions to key stakeholders.

The platform encompasses a robust library of templates for different workflows and provides a user-friendly interface that upholds Moovila’s philosophy of being “User Obvious.” This distinguishing factor ensures that little to no training is required by project managers, collaborators, and contributors to collaborate via the Moovila platform. By setting up a ‘test drive environment’ for clients, the company enables a smooth transition into the Moovila ecosystem.
With a professional services team dedicated to assisting organizations, the company enables effective utilization of the platform, specifically around the critical path. This aids a variety of industries including medicine, manufacturing, and retail among others in achieving successful collaboration. 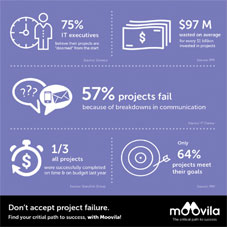 “With Moovila, the needle gets moving when organizations collaborate with distributed teams. It assists project managers in efficiently streamlining the workflow for faster completion,” adds Psenka. For simple collaborations, the on-boarding process is instantaneous. Once they evaluate the platform and wish to use it, the process is as easy as activating the application to get started. For larger organizational and enterprise projects, Moovila has created a professional services team and critical path services, which empower companies by helping analyze their existing work effort around the critical path.

"We have the ability to forecast and predict the risks associated with dynamic work environments, and that is our key differentiator"

Bringing the Handshake Back to Business

Moovila’s proficiency in critical path management has assisted several clients in optimizing their workflows for distributed collaboration, where teams are dispersed geographically. The platform ‘brings the handshake back to business’ as it helps provide greater visibility and accountability into various organizational operations, in turn, assisting project managers to understand which subcontractor or external vendor has accepted or rejected the tasks assigned to them. An ongoing collaboration with one of Moovila’s clients showcases the importance of this feature, where the client is currently carrying out an 18 month-long implementation for a human capital management platform. Involving multiple organizations, with over a hundred people working on the project, in addition to two external consulting firms - the client is utilizing the Moovila platform to manage the overarching workflow and break down the critical path of the projects. As any delay in the project would cost thousands of dollars per day, the management of the critical path plays a vital role in the endeavor.

The company is also in the process of developing joint ventures with a prominent construction equipment manufacturer and a global consulting firm. While the former association correlates to collaboration and work management in the construction space, the latter is focused on improving customer onboarding and management. Psenka describes a few of the noteworthy benefits of critical path management by saying, “With the Moovila platform, all our efforts are dedicated to connecting everyone that is involved in a project, rightly upholding accountability and transparency for numerous actions that take place along the critical path. We have the ability to forecast and predict the risks associated with dynamic work environments, and that is our key differentiator.”

Moovila’s excellence finds its roots in eThority, a business intelligence and analytics company previously founded by Psenka, which was later sold to Equifax in 2011. Psenka and fellow co-founders then built the foundation for Moovila, to provide connectivity, accountability, and predictability for business strategies, three pillars that support Moovila’s credibility. “As much as we are proud of our first of a kind technology, the Ying to that Yang is the service part of our culture. We love working with our customers,” concludes Psenka. 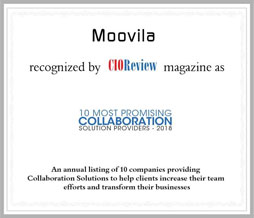 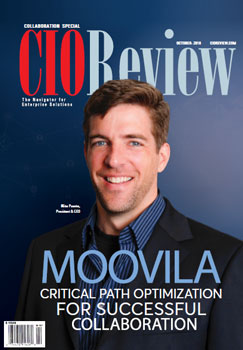